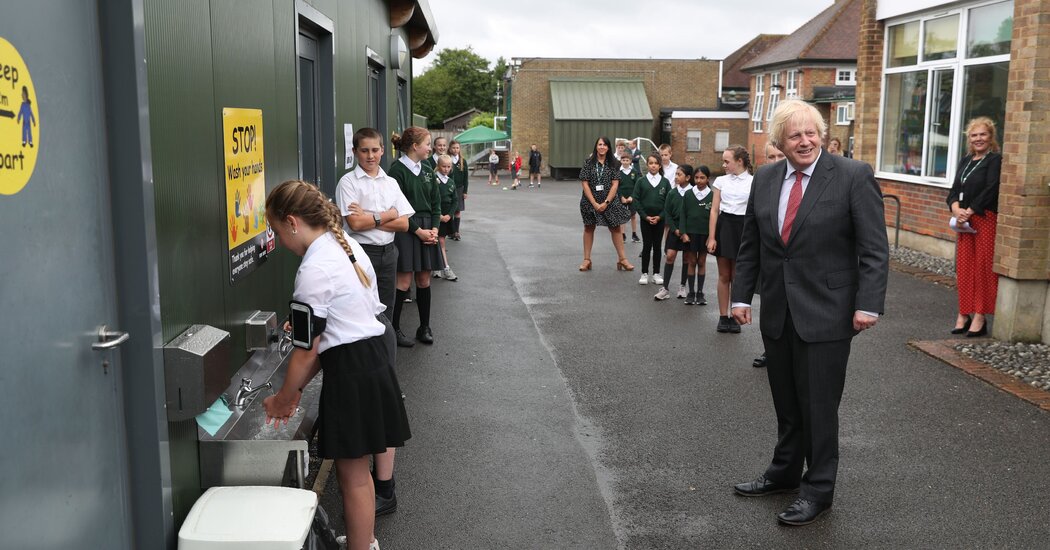 Taking an uncharacteristically somber tone, Prime Minister Boris Johnson of Britain announced new virus-related restrictions on Tuesday that could stay in place for the next six months and said that the country had reached a “perilous turning point” in the pandemic.

“This is the moment when we must act,” Mr. Johnson said. He described the new measures as a “stitch in time to save nine” — a targeted effort that could avert more blunt-force restrictions down the road.

Mr. Johnson has been widely blamed for missteps that have worsened the pandemic in Britain, which has the highest death toll in Europe — more than 52,000, by one government count — including delaying the order of a lockdown in March, when cases and deaths were soaring.

Across the aisle: In his first major address since becoming the leader of the opposition Labour Party, Keir Starmer took aim at Mr. Johnson’s handling of the crisis, denouncing him as “just not up to the job” and saying a second national lockdown would be a “sign of government failure.”

China-U.S. feud on display at the U.N. General Assembly

The presidents of the United States and China squared off in their Tuesday speeches to the annual General Assembly on the coronavirus, global warming, human rights, international cooperation and a range of other issues, punctuating a superpower rivalry that the leader of the 193-member United Nations, Secretary-General António Guterres, has called a great global risk.

Meanwhile, a push by Mike Pompeo, the U.S. secretary of state, to prioritize religious liberty and property rights has gained little traction among the U.S.’s European allies, who cite concerns that it could come at the expense of protecting marginalized groups.

Recap: The United Nations is marking its 75th anniversary this year against a backdrop of multiple crises. Because of the pandemic, none of the leaders have traveled to the New York headquarters to deliver their addresses. The speeches are being delivered via prerecorded videos.

The cascading climate disasters that dominate headlines and disrupt lives — drought in the American West fueling historic wildfires that send smoke all the way to the East Coast, or tropical storms lining up across the Atlantic to march destructively toward North America — are no longer features of some dystopian future. They are the here and now, worsening for the next generation and perhaps longer, depending on humanity’s willingness to take action.

The Times spoke to two dozen experts who said decisions made now would spell the difference between a difficult future and something far worse. “It’s as if we’ve been smoking a pack of cigarettes a day for decades” and the world is now feeling the effects, said one climate scientist.

Reset: Managing climate change, experts said, will require rethinking virtually every aspect of daily life, including home construction and power grids — and a large shift in politics in the United States, which has largely ignored climate change.

If you have 8 minutes, this is worth it

The prisoners who held up the Afghan peace talks

A young Afghan police officer killed two U.S. Marines in 2011, and although he did not appear to be acting on behalf of the Taliban, the insurgent group demanded his release from prison. Mohammad Dawood, the officer, was one of just six prisoners — out of 5,000 released by the Afghan government — over whom a bitter disagreement almost derailed peace talks this month. Above, delegates in Doha, Qatar, on Sept. 12.

The U.S., France and Australia lobbied against the release of the six men, who had killed their citizens. Our reporters looked at Mr. Dawood’s case, which demonstrates the tough choices involved in trying to make peace in the middle of a bitter war.

Here’s what else is happening

Ruth Bader Ginsburg: A vote in the U.S. Senate on President Trump’s nominee to replace the late Supreme Court justice looks all but certain after Senator Mitt Romney said he supported moving forward to fill her seat.

Facebook: The social network said it had taken down fake pages created in China that were aimed at influencing the U.S. presidential election, both for and against Mr. Trump and former Vice President Joe Biden.

National Trust: Nearly 100 properties managed by the revered British conservation society have direct connections to slavery and colonialism, it said in a report.

Euthanasia: As governments around the world consider allowing the ending of lives to relieve suffering, the Vatican reiterated its opposition to assisted suicide and euthanasia, which it called “intrinsically evil” acts, “in every situation or circumstance.”

Snapshot: Above, rescuers in Tasmania working to bring a pilot whale back to safety. More than 450 of the whales somehow ended up stranded on a beach in the Australian state. Whale beachings are not uncommon in Tasmania, but this one is among the worst. Most of the whales are believed to have died.

Lives lived: Betty Bushman, one of baseball’s first female sportscasters, whose brief 1964 tenure was a ploy to interest more women in the Kansas City Athletics, died at 89 this month.

What we’re listening to: This Radiolab episode about falling. “For someone who has a fear of falling, an hour of listening about great falls — including Niagara Falls, myths about cats and love — makes the world seem a little less scary,” writes Remy Tumin of the Briefings team.

Now, a break from the news

Cook: This spinach-potato pie “feels like a great, cozy nurturing hug,” writes our food columnist Yotam Ottolenghi. “And that’s exactly what we all need right now.”

Read: If you’d like to learn more about Ruth Bader Ginsburg, the Supreme Court justice who died on Friday, these books are building blocks.

Watch: The sitcom “Derry Girls,” now streaming on Netflix, follows a teenager and her four hilarious friends in 1990s Northern Ireland. “All its characters, even minor ones like the priest, are finely, believably portrayed,” our reviewer writes.

Keep active, entertained and well-fed with our At Home collection of ideas on what to read, cook, watch, and do.

And now for the Back Story on …

The faces of climate migration

Between now and 2070, the portion of our planet that is a barely livable hot zone could go from 1 percent to 19 percent, displacing huge numbers of people. Within the United States alone, according to one projection, at least 13 million people will have to move by 2100 because of climate change.

The photojournalist Meridith Kohut documents humanitarian issues. For a series on global human migration in the The New York Times Magazine, she captured families and workers facing this reality. In this edited Times Insider interview, she talked about the assignment.

Having first photographed this story around Latin America, how different was it photographing in the United States?

I’ve covered humanitarian crises internationally for over a decade, and this year is one of the first times I’ve ever worked covering my home country. You think America is more insulated from the devastation of climate change, but the past year has shown me that that’s just not true.

Looking through your photos, there’s a kind of sweetness to some of them. What was your approach?

The story is data-driven, and Abrahm Lustgarten had already finished writing it before I started working on the photographs. My job was to humanize the data — to go out and tell the stories of the people living with what the data shows. My approach was to try to document the emotional toll it takes on people who lose their homes, the seniors who spend their days just trying to survive the heat, and hopefully do it in a way that touches our readers’ hearts and inspire them to take action to help reduce carbon emissions and mitigate climate change.

With weather being such a factor in making your job easier or harder, what kinds of challenges were you encountering?

My cameras got utterly and completely filthy. We were right up on the fireline at multiple fires, and it was raining ash. It was very hot, and the thick smoke made it hard to breathe at times, and burned my eyes and throat.

I drove into Hurricane Laura at dawn, a few hours after it made landfall. The hotel The New York Times had booked for me was destroyed, so I slept in my truck for days. My editor felt really bad about it, but after over a decade living and working in Venezuela I’m pretty used to challenging field conditions. “Oh my gosh, you had to sleep in your truck!” she said. “Are you kidding?” I responded, “I was in a Walmart parking lot! It was so nice!”

That’s it for today’s briefing. Thanks for starting your day with The Times.

Thank you
To Theodore Kim and Jahaan Singh for the rest of the break from the news. You can reach the team at [email protected].

P.S.
• We’re listening to “The Daily.” Our latest episode is about what the U.S. Supreme Court vacancy could mean for voters in swing states.
• Here’s our Mini Crossword, and a clue: “Sea predator whose name contains another sea predator” (five letters). You can find all our puzzles here.
• The accidental haiku “Now they just raise a / silent toast across the room / at cocktail hour.” appeared in The Times on Monday, as reported by the bot @nythaikus.
• CC Allen, who has been a producer at NowThis and BuzzFeed News, has joined The Times as a senior video journalist for NYT Cooking.

Dinner off as Italy closes restaurants early in virus crackdown