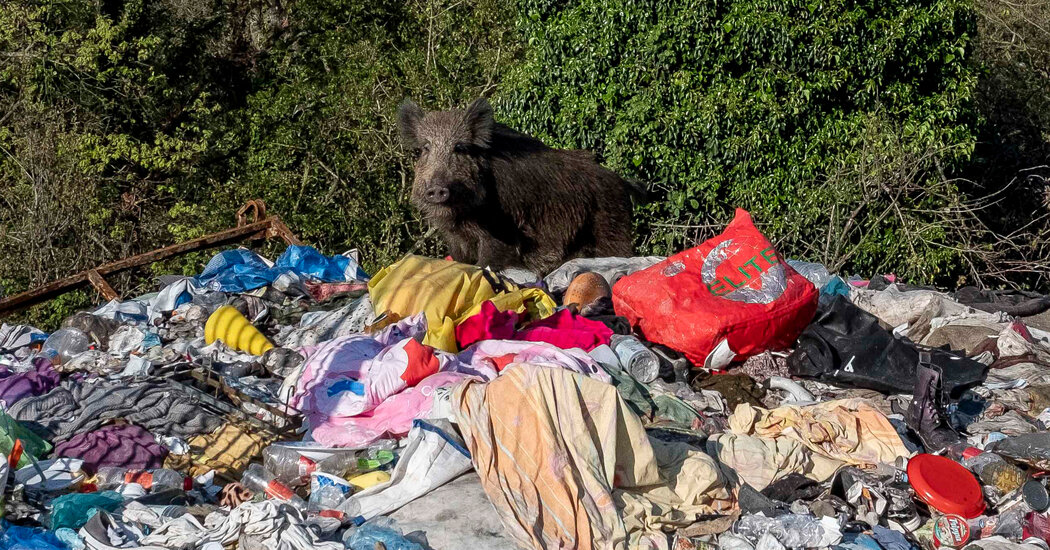 Wild boars are a menace in Rome, strewing garbage around the city, blocking traffic and causing numerous car accidents. Residents have been demanding action — but not this.

Animal rights activists and many Romans are expressing outrage after the authorities killed a sow and her six piglets on a playground near the Vatican, only hours after families and children had been there, feeding the boars. They say the animals should have been safely captured and transported to the wild.

“It was a mother with her little ones — just emotionally, this is terrible,” said Andrea Brutti, who is the chief official for wild fauna at Italy’s National Board for Animal Protection.

Some people have a fondness for the animals, but wild boars are far from harmless. They can be aggressive and dangerous, and are a growing presence in Rome, drawn by the uncollected trash that plagues the city.

From the city’s central streets to the outlying arteries that border parks and woods, boars have become a major driving hazard. The threat is not limited to Rome — earlier this month, two former professional soccer players died when their car hit some wild boars crossing a highway in northern Italy.

Boars are a point of contention throughout the country. Hunters have argued that the perpetually hungry animals are nuisances that have bred out of control and need to be culled to save the country’s agriculture.

Activists argue that hunters have worked to increase the number of wild boars, to enable more hunting. The fight has extended into politics, with representatives of the right-wing League party often siding with hunters.

But pretty much everyone agrees they have no place in the cities. Images of wild boars tearing into the garbage bags piled high around the city have become common in recent years. Last month, a family of them was filmed peacefully walking through the streets near St. Peter’s Square.

Rome’s boar troubles mirror the dilemmas faced by developed areas around the world, as they try to keep in check populations of deer, geese, bears, coyotes, sea gulls or other creatures without running afoul of animal lovers. In many places, humans have eliminated the animals’ natural predators or competitors, while inadvertently providing a food surplus for those that remain.

The city, the region, residents and animal rights advocates have argued for years over what to do about Rome’s boar problem, without finding a solution. The advocates say parks on the outskirts of the city should be fenced to contain the animals, and that roads should be equipped with alarm systems, but no one wants to pay the bill.

The porcine family at the center of the latest uproar had roamed the streets near the Vatican for days, troubling some residents and delighting others. They ended up in the playground — some say the police entrapped them — last Thursday, and children started feeding them anything handy.

Then, late Friday night, the police made their move. While neighbors shouted “cowards” and expletives from their windows, officers shot the boars with tranquilizer darts, and then veterinarians gave them lethal injections.

Videos and photos of the scene spread across Rome. A member of Parliament and founder of an association for animal rights accused the city of the killing.

“It was a gratuitous barbarity,” Michela Vittoria Brambilla said in a video posted on social media. “Residents were standing around the park watching the massacre.”

Rome’s mayor, Virginia Raggi, ordered an investigation. A city official who was involved, Daniele Diaco, said he was receiving death threats as a result of the incident. The city, run by the anti-establishment Five Star Movement, and the government of the Lazio region, run by the Democratic Party, have blamed each other.

City officials said that in this and other, similar cases, the city alerts Lazio to the problem, but does not decide what action to take.

But regional officials, who had trouble finding the cages needed to trap and transport the boars, said they made the decision to euthanize the animals in consultation with the city officials.

Later that day, a national animal welfare group offered its services, saying it could capture the boars and move them to a nature preserve. The Lazio regional council member responsible for the environment says she agreed and called off the killing, asking a city official to pass the word to the police.

The message never reached the officers at the playground. The boars were killed and loaded onto a truck for disposal.

“In the end, animals like people are victims of bad politics,” Mr. Brutti said.

Hawaii’s Freshwater Leaks to the Ocean Through Underground Rivers