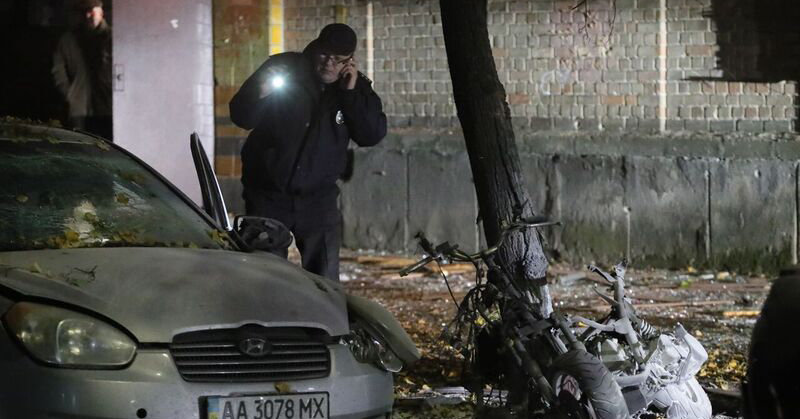 MOSCOW — Earlier this year, a heavyset man living in Vienna and known as Beck Martin said during a TV interview that he was assisting an investigation of a complicated murder-for-hire plot, in which three people were to be killed in exchange for $2 million.

He described a blood-splattered world of contract killings for revenge and politics, of a type that seems to exist only in moviemakers’ fantasies — and in Russia.

Now, associates of Mr. Martin say his murder over the weekend, which he claimed to know was coming and carried a $5 million reward, lends credence to his account of operating as an informant on a group of assassins from the Russian region of Chechnya.

Ihor Mosiychuk, a former member of Ukraine’s Parliament and one of the three targets of the plot Mr. Martin described, said in an interview that he had met with Mr. Martin and found him credible.

“The materials that he gave to me and the police fully conformed with the events that occurred,” he said.

In the fateful interview, Mr. Martin said he had for years been cooperating with the Ukrainian and Austrian secret services to inform on officials in the Chechen regional government who he said ordered contract murders in Europe and Ukraine. The interview was posted online in February by the Ukrainian television station Svobodny.

Born Mamikhan Umarov in Chechnya and known by a variety of aliases, Mr. Martin told the station that he had fought against Russia in the post-Soviet wars in Chechnya and received a new identity as an asylum seeker in Austria more than a decade ago.

Ukraine’s national police and the country’s domestic intelligence agency, the S.B.U., declined to comment on the killing of Mr. Martin, as did the authorities in Austria, who have said they arrested two ethnic Chechens in connection with the shooting on July 4 outside Vienna.

In a statement posted online Thursday, the iron-fisted and Kremlin-allied Chechen leader, Ramzan A. Kadyrov, denied any role in the killing and blamed unspecified Western security services. “The sellout mouthpieces receive money for their work and are then killed as supposedly innocent victims,” he wrote.

Organized-crime style contract murders were rampant in Russia’s business circles in the early post-Soviet period. In recent years, however, the rising incidence of contract killings by Russians outside the country is raising alarms.

American intelligence agencies are investigating whether Russia has paid bounties to the Taliban or criminal groups for attacks on American soldiers in Afghanistan. Speaking anonymously, intelligence officials have said $500,000 in cash was found at the house in Kabul of a possible intermediary, who was thought to have fled to Russia to avoid arrest.

In 2006, Russia legalized the targeted killing of “terrorist” suspects abroad under authorizations that Russian officials like to compare to the legal justifications for American drone strikes. Russia has never publicly acknowledged using the authority granted under the law.

While Ukrainian officials have for years accused Russia of conducting strikes against military officers and members of paramilitary groups active in the war in eastern Ukraine, there is no direct evidence tying the Kremlin to these schemes.

In his February interview, Mr. Martin identified the three targets of the plot as a commander, a deputy commander and a sniper in Ukrainian paramilitary groups fighting Russian-backed rebels. Two of them were Chechens, and therefore considered turncoats, and the third, Mr. Mosiychuk, had insulted the Chechen leader, Mr. Kadyrov, in a video posted online.

Mr. Martin said he learned of the affair because an official of the Chechen regional government, unaware that Mr. Martin was an informant, had asked him to act as a middleman in arranging the killings, and that he had recorded the conversations.

Svobodny published several of the recordings, in which there is some haggling over the price. At one point, a man speaking in Chechen with Mr. Martin says of the three targets in Ukraine, “If they get worked over, it would be very good.”

Elements of the story are unclear, including why the intended victims were not warned in advance. But one thing is certain: All three people were targeted.

Under the guise of a foreign correspondent for the French newspaper Le Monde, one assassin, identified as Artur Denisultanov-Kurmakayev, arranged to interview two of them: the commander of the Dzhokhar Dudayev paramilitary group, Adam Osmayev, and his wife, Amina Okuyeva, who was a sniper.

In that attempt in Kyiv in June 2017, Mr. Osmayev was wounded before Ms. Okuyeva shot and wounded the fake journalist. Mr. Denisultanov-Kurmakayev was detained but traded to Russia last year by President Volodymyr Zelensky for captured Ukrainian spies.

Mr. Denisultanov-Kurmakayev had also asked for an interview with Mr. Mosiychuk, who was deputy commander of the nationalist Azov paramilitary group as well as a Member of Parliament. But he had brushed off the request by suggesting the reporter speak to his press secretary instead.

That October, the attacks resumed. An assailant with a machine gun hiding in the bushes near a railway crossing outside of Kyiv sprayed the car of Mr. Osmayev and Ms. Okuyeva, killing Ms. Okuyeva.

Also that month, a remote-controlled bomb attached to a parked motorcycle on a Kyiv street exploded near Mr. Mosiychuk, wounding him and killing a bodyguard and a bystander.

In the TV interview, Mr. Martin said he had helped the Ukrainian authorities identify a courier delivering payments from Chechnya to Europe for contract murders, a lead that could shed light on a string of murders in the Chechen diaspora in Europe.

Last August, an assassin riding a bicycle and armed with a silenced pistol shot and killed a former rebel commander, Zelimkhan Khangushvili, in the Kleiner Tiergarten park in Berlin. Police arrested the killer after he threw his gun and a wig in a river. German officials said they suspected Russia was behind the killing, which Moscow denied, and expelled two Russian diplomats in retaliation.

In January, a Chechen exile and critic of Mr. Kadyrov, Imran Aliyev, was stabbed 130 times and died in his hotel room in Lille, France. Prosecutors say a suspect escaped to Russia.

A few weeks later, a Chechen blogger, Tumso Abdurakhmanov, who is critical of Mr. Kadyrov, said he had fought off and subdued an assailant with a hammer who had sneaked into his home in Gavle, Sweden. Mr. Abdurakhmanov made and posted a video showing him questioning the man immediately after the fight, demanding to know who had sent him.

The man and a woman, both Russian, were arrested in connection with the attack.

Why Mr. Martin decided to go public with his tale, when the consequences seemed so lethal, is not entirely clear. Mr. Mosiychuk said Mr. Martin was motivated by a blood feud with the Chechen leader, Mr. Kadyrov, whom he blamed for the death of his brother.

“All Chechens who went through the war live in a terrifying world,” he said. “It’s a complicated situation.”

Mr. Martin said in the interview that his relations with Ukraine’s police were fraying, suggesting he could no longer count on their support. It is also conceivable that, if Mr. Martin knew he was being stalked, as he claimed, he might have thought that the glare of publicity was his best defense.

Asked if the price on his own life seemed high or reasonable, Mr. Mosiychuk said it seemed high but, “How should I know? I don’t order killings.”

China Tones Down ‘Hotheaded’ Nationalism as Relations With U.S. Sink

‘The Fish Rots From the Head’: How a Salmon Crisis Stoked Russian Protests