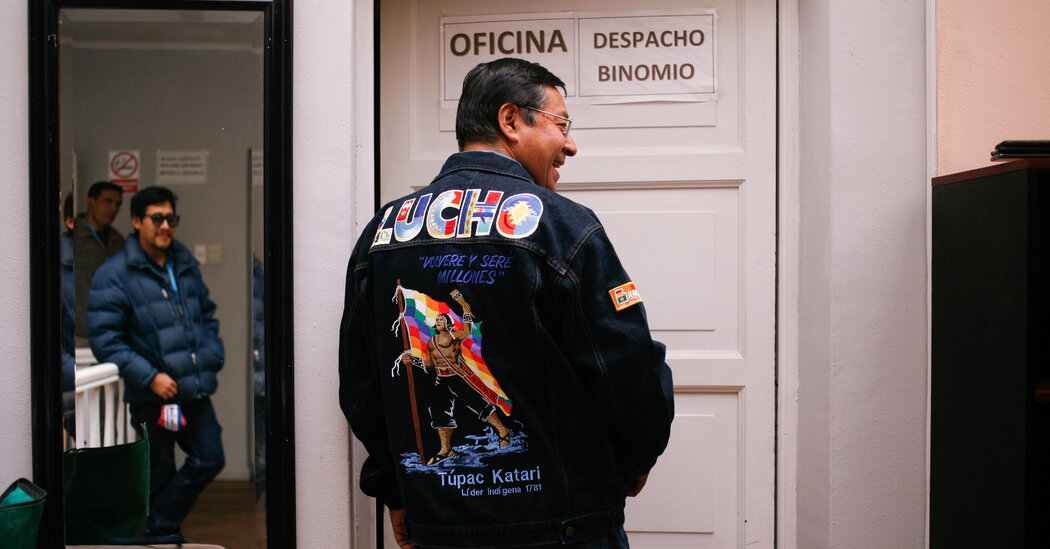 LA PAZ, Bolivia — In a presidential election that was widely viewed as a referendum on the legacy of Evo Morales, Bolivia’s first Indigenous president, voters appear to have spoken clearly: They want his socialist project to go on.

On Monday, exit polls in Bolivia showed Mr. Morales’s handpicked candidate, Luis Arce, with such a wide lead that his main opponent, Carlos Mesa, conceded the election, and Mr. Arce’s supporters began celebrating in the streets — despite the fact that official results may not be available for days.

“It is up to us, those who believe in democracy, those who said we would accept the result, favorable or not, to recognize that there is a victor in this election,” said Mr. Mesa. “We accept this result.”

One pollster, Ciesmori, said around midnight on Sunday that Mr. Arce had 52.4 percent of votes, and that Mr. Mesa trailed with 31.5 percent.

Outside Mr. Arce’s campaign headquarters, more than a hundred people gathered in celebration on Monday, chanting “the pollera will be respected!” — a reference to the traditional skirt that has become the symbol of his party’s Indigenous base.

Mr. Arce is the chosen successor of Mr. Morales, a transformative figure in a nation where power was traditionally concentrated in the hands of a wealthy, white elite.

During his 14 years in office, Mr. Morales slashed poverty, built roads and schools, and nationalized the oil and gas industry. But he fled the country last year after his run for a fourth term ended in accusations that he had committed election fraud, deadly protests and a call by the military for him to step down. He called his ouster a coup. He sat out this year’s vote in neighboring Argentina.

In the interim, the country has been run by a temporary president, a conservative named Jeanine Añez, who has persecuted the former president’s supporters, rolled back many of his policies and stifled dissent. Mr. Morales has remained a contentious figure in Bolivia, both adored for his role in aiding the poor and criticized for holding on to power for too long.

On Election Day, voters frequently voiced frustration with Mr. Morales, but said that they still believed in his party, the Movimiento al Socialismo, or MAS, saying it was the only political movement that would stand by families who had lived on the margins for so many generations.

Some said they feared that Mr. Mesa, despite his conciliatory tone and attempt to build a wide coalition, would follow in Ms. Añez’s steps.

Mr. Mesa, a former journalist and historian, was president from 2003 to 2005, but resigned amid protests that included calls for the country to nationalize gas resources. He had taken the reins after serving as vice president to another leader, Gonzalo Sánchez de Lozada, known as “Goni,” and some voters continue to associate Mr. Mesa with his predecessor’s policies of privatization.

“We can’t go back to the time when we are suffering and others are winning,” said Luisa Alvarez, 40, a voter in the MAS stronghold of El Alto.

In El Alto and the adjacent city of La Paz, the administrative capital, versions of “Mesa = Añez” and “Mesa = Goni” are frequent graffiti sightings.

Speaking from his campaign office on Monday, Mr. Mesa said that based on the exit polls, he was admitting that his opponent had won and that his party would be “head of the democratic opposition for 2020-2025.”

Mr. Arce’s party declined to claim victory, instead saying they were waiting for an official count. At MAS campaign headquarters, party spokeswoman Marianela Paco said they were waiting for the electoral body to announce results, because they didn’t want to “spoil the happiness” by calling the vote without a sanctioned tally.

But she called the 20-point exit poll lead an “overwhelming” result, and said that party’s goal now was to “reconstruct the ruins” left behind by Ms. Añez.

Mr. Arce has positioned himself as a transition candidate, vowing to carry on Mr. Morales’s legacy, while training younger leaders from his party to take the reins.

“We are MAS 2.0,” he said in an interview shortly before the election.

He added that Mr. Morales would have no role in his government.

A former economics minister for Mr. Morales, Mr. Arce inherits a country that is deeply divided and facing an economic crisis. Wounds from last year’s protests are still raw. The coronavirus has battered the economy. And Mr. Arce will not have a key tool that helped Mr. Morales — a commodities boom that sent money flowing in.

On Election Day, in the small city of Achocalla, Victor Apaza, 40, stood with his elderly mother on his arm. She wore a pink sweater and a traditional skirt. Both had just voted.

Mr. Apaza, who lost his job in a metal factory amid the pandemic, said that he was voting for Mr. Arce because he believed the candidate was the only one who could rescue Bolivia from its social crisis — “we want a reconciliation,” he said — while also implementing just economic policies for men like him.

The metal factory had just offered him his job back — at a reduced salary.

But he also issued a warning. If Mr. Arce “doesn’t bring us solutions,” he said, “we’ll go to the street. There’s no other option.”