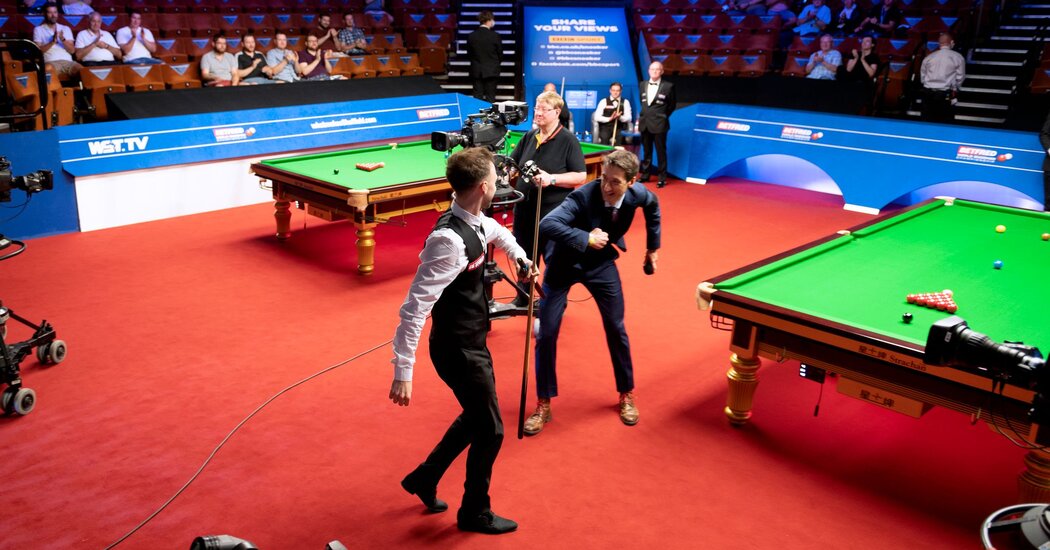 SHEFFIELD, England — The 2020 world snooker championship, which began on Friday, had a familiar feel. The stage of the intimate Crucible Theatre, the event’s home for more than 40 years, was bathed in klieg lights, the green cloth of the snooker tables and the red carpeting so brightly illuminated it was like stepping inside a Skittles bag. Judd Trump was back to defend his title, and for the first time in months, there were fans in the seats.

On opening night, the event had a bigger audience than the one in the theater. Originally scheduled for April but delayed by the coronavirus pandemic, it had been designated by the British government as the first indoor test event for the phased return of live crowds. That made the championship, a staple of the British sports scene and a riveting television mini-series with a global audience of more than 300 million, suddenly of great interest to leagues and championship organizers in dozens of other sports, especially those held indoors, all of them invested economically and emotionally in the return of spectators.

How well the 17-day championship fared with a reduced fan presence, they knew, might set the stage for similar experiments in other sports in other places, like basketball and hockey in Europe and netball and badminton in Asia.

The experiment lasted one day, undone by outside forces, renewed virus fears and governmental second thoughts.

“You can feel that something is not quite right,” Trump said.

Ticket-holding fans, who were not subjected to temperature checks or testing before entering the theater, emerged from Friday’s three sessions and spoke of the subdued atmosphere, as if their church had turned into a funeral parlor. There had been only 137 spectators at the first night session, including a few family members and friends of Trump’s who watched him close out his first-round match.

To make the test event happen, the World Snooker Tour had walled off its event as well as it could. It instituted regular coronavirus testing for players, their support staff, contractors and television personnel, and competitors were urged to maintain proper social distancing measures and to self-isolate as much as possible.

Hand sanitizer was as ubiquitous as cue chalk, and the spectators holding tickets for each session — limited to 300, about a third of the Crucible Theatre’s capacity — were required to provide contact tracing information and to wear face coverings until they were in their seats. Some of the restrictions defied logic. There were no concession stands, the better to limit interactions between strangers, but one fan in the evening match, in desperate need of a pick-me-up, left the arena briefly and slipped into a convenience store around the corner for a coffee that he brought back to his seat.

The one factor the tour could not control, however, was the behavior of those well outside the theater. This led to the surreal juxtaposition Friday of the prime minister of Britain, Boris Johnson, announcing a policy U-turn and the end of the pilot program for live sports during a news conference at the same moment that, roughly 180 miles away, spectators were watching Trump and Tom Ford play the first nine frames of their match.

Citing concerns about a second coronavirus outbreak and rising infection numbers, Johnson announced that he was ordering a halt to the programs the government had approved for select snooker, horse racing and cricket events.

“We can’t just ignore this evidence,” Johnson said. The restrictions will remain in place for at least two weeks, leaving a glimmer of hope for snooker fans that they might still get to see their favorite players in person before the championship ends.

The government’s policy shift came a day after a snooker player with a high profile, the five-time world champion Ronnie O’Sullivan, had referred to the players as “lab rats” in an interview. O’Sullivan, who opened play on Sunday, made his comments in a video teleconference with reporters, but many suspected his words were directed at government officials.

Sports and the Virus

Here’s what’s happening as the world of sports slowly comes back to life:

“He does carry a huge amount of influence in the U.K.,” Shaun Murphy, the 2005 world champion, said. “When he speaks, people listen.”

Murphy, whose first match is scheduled for Monday, said he was comfortable performing in front of fans again. But not every player felt that way. Anthony Hamilton, who qualified for the field of 32 but expressed reservations about competing because he has chronic asthma, withdrew from the event on Thursday. Hamilton argued that the decision to phase in fans was premature.

“They said it was a trial, and for me that word underlines everything,” Murphy said.

The crowd at Friday’s morning session included two local snooker enthusiasts, James Arthur and Karl Brownlow, who emerged from the arena looking disoriented in the 90-degree heat. The men said they have been regulars for decades at the event, which has been held annually at the Crucible since 1977.

“Usually people are breathing down your neck,” Arthur said, “but the atmosphere was totally muted today.”

Even when the Crucible is packed and the fans in the first row are close enough to nearly reach out and touch the players, the atmosphere at snooker — a billiards game played on a 6-foot-by-12-foot table and scored by players’ pocketing 21 colored balls to earn points — can have the solemnity of a church service.

Spectators clap for well-executed shots, but it can grow so quiet at tense moments that the players can hear a commentator’s voice leaking from a front-row fan’s earpiece. Fans don’t often open their mouths unless it’s to cough, which in normal times can make spectators feel, rather bizarrely, as if they were sitting in a doctor’s office and a snooker match broke out.

When O’Sullivan spoke to reporters last week, he recounted the experience of riding in an elevator with someone who started coughing. It reminded him, he said, of the risk every player is taking to compete. His mother, Maria, has pneumonia, O’Sullivan said, and he worries about infecting her.

“I defy anybody, if they have been keeping their distance from people for four months, to say, ‘Oh, right, now you’ve got to go into a room full of people,’ unless you have got a death wish, and some people have in many ways, and they just don’t care,” O’Sullivan said.

And if the general public just don’t care, said Django Fung, Trump’s manager, it doesn’t matter how many precautions sports leagues take. “You need the people of the country to be sensible to keep the numbers down,” he said.

By the time Fung spoke on Saturday, the government’s edict had dispersed the small snooker crowd like red balls on a poor opening break.

Hours earlier, Chris Ellis, a security guard at the Crucible, had been stationed outside the theater’s entrance when a fan with a ticket approached him. The man explained that he had traveled from Ireland and had tickets for a week of sessions. How could he get in? he asked.

It was left to Ellis to tell him that he couldn’t. It was a safety shot he took no joy in executing.